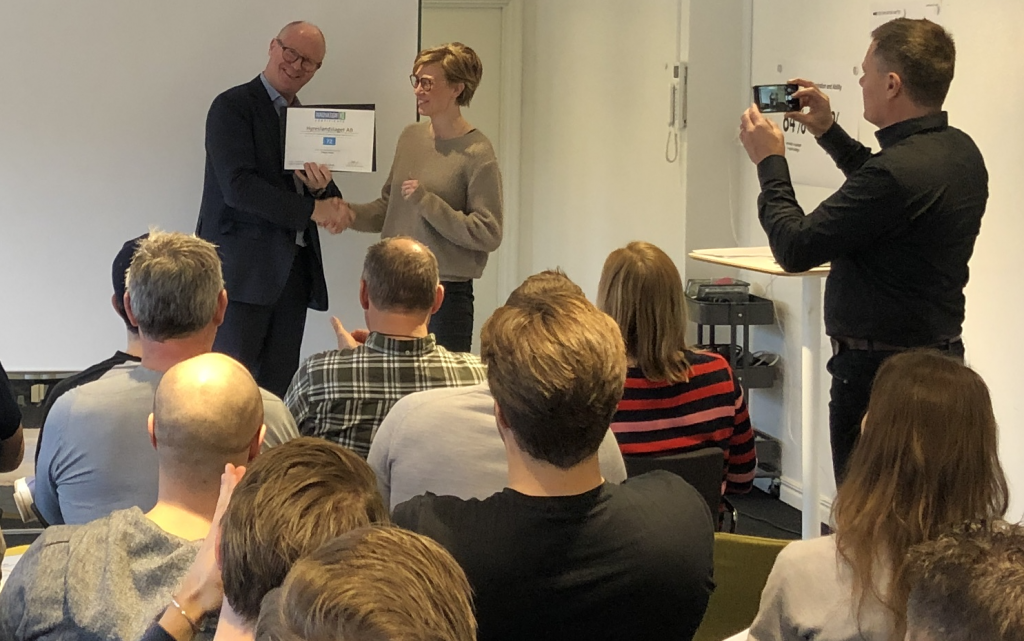 Magnus Penker presents Lisa Toresson of HLL with their Innovation IQ, the highest in Europe.

When co-founders Borje Toressomand and Sune Törnquist decided to launch their company in 2011 they knew what kind of company they wanted to start. They would rent and service construction equipment, but even beyond that HLL Hyreslandslaget AB would be a company built on the right values. They knew that everyone potentially could access the same machines—how they worked and the values they shared and created would make the difference. World class service and customer experience on a new level was the goal

From the very beginning they worked on aligning around values and a shared culture. When they started to grow, one of the most significant recruitments they made was hiring their own in-house HR Director, Ulrika Lanzén. She was responsible for hiring and onboarding new employees, an important role for a company focused on culture and innovation.

An important part of the management and culture of HLL Hyreslandslaget is that the company has a flat structure, which empowers employees to make decisions. They are given a budget and entrusted with responsibility. This trust is rarely misplaced. “We allow them to make mistakes a few times”, says Sune, “but they quickly learn.”

By leveraging both incremental and radical innovation strategies, an approach strongly correlated with increased capability in our own research, they have been able to gain a huge competitive advantage in a very conservative industry.

Now they are strongly positioned to act on this advantage. They invited Innovation360 on to help them innovate around a few areas of opportunity identified during their assessment, including services. We assessed their organization and awarded an InnovationIQ score of 72, which represents the highest European score. Magnus Penker awarded CEO Lisa Toresson with the certificate March 4. “Many companies would be satisfied, but HLL is using their capabilities to change a conservative industry,” said Innovation360 CEO Magnus Penker. “A lot of tech companies would be thrilled to have these capabilities and culture in place to innovate.”

HLL Hyreslandslaget is looking forward, and determined to invest even more in innovation–and to bring as many employees to the strategic table as possible. Their engaged workforce is a huge asset in defining that direction. They are poised to lead in their industry, and to find ways to reshape the landscape to their own advantage.

Want to learn more about getting your own team or organization ranked for innovationIQ? The InnovationIQ is a great way to benchmark against your own progress, and comes with a 40-page tailored report detailing your innovation footprint – strengths, vulnerabilities, critical skills in need to development, benchmarks against leading competitors, and areas where your capabilities give you the best chance at producing innovations that matter.

You can find a certified assessor on the official InnovationIQ websiteor our service offers here.