The Global Innovation Index gathers data from companies and their clients to measure how innovative countries are all over the world. This provides an overview of the business environment and could help predict how global economies will evolve over the upcoming decades. For 2016, the Global Innovation Index found that Switzerland and Sweden are the first and second most innovative countries on the planet, respectively. The United Kingdom, United States and Finland fill out the top five positions.

While the 2016 Global Innovation Index certainly provides useful information, it does have some limitations for understanding the underlying mechanisms. Results from InnoSurvey, an innovation assessment that has been used by more than 1,000 companies operating in 62 countries, reveals a limitation of the Global Innovation Index when it comes to understading the companies that actually produce the innovations. Since the index measures innovation by country, it assumes that business leaders can rely on an average. In practice, the average level of innovation within a country says very little about that country’s business environment. In order to understand where innovation occurs, you must look at each company individually.

Sweden provides a good example of how a couple of highly tech innovative companies can skew the Global Innovation Index’s results. The country has a high ranking largely because of tech companies like the Spotify, Skype, King and Mojang AB. All of these radical and highly innovative tech companies have their headquarters in Sweden.

[bctt tweet=”Sweden provides a good example of how a couple of highly tech innovative companies can skew the Global Innovation Index’s results. The country has a high ranking largely because of tech companies like the Spotify, Skype, King and Mojang AB. ” username=””]

Radical innovators  like Spotify, Skype, King and Mojang AB skew the results to make Sweden look more innovative than it is. While there are other impressive companies in Sweden, the radical innovators stand out as the country’s top innovators. When you use InnoSurvey to look at other companies operating in Sweden as well as Switzerland, the countries suddenly doesn’t look like such an innovation leader (see figure 1 and 2). 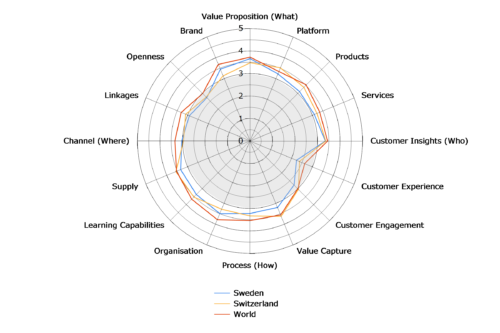 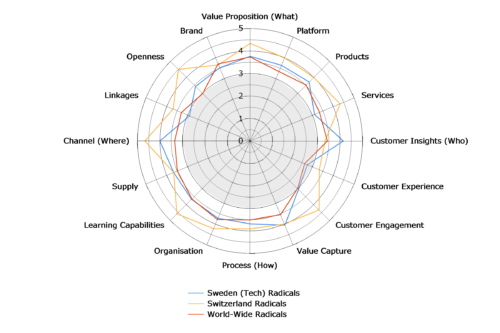 Governments Have a Limited Influence on Innovation

Governments undoubtedly have some influence on innovation. You may notice that Sweden and Switzerland both provide socialized healthcare to their citizens. By doing so, they remove the burden of health insurance from employers. When the government takes on this role, it could encourage entrepreneurs to take more risks because they know they have large safety nets to catch them and their employees when their ideas fail.

The truth of the matter, though, is that governments have a limited influence on innovation. If Sweden’s or Switzerland´s government had somehow created an environment that maximized the innovation capabilities of all companies, then you would expect to see more of those companies leading in their industries. Instead, you only see a small number of innovators pushing the boundaries of what’s possible – the radical innovators.

While Sweden’s government may have helped create an environment that encourages companies to explore new ideas, the government’s involvement cannot account for Sweden’s high rank. Instead, the honors go to the brave radical innovators for developing new products, services and business models that have changed the way people around the world think and act. When you remove the radical innovator from Sweden’s and Switzerland´s average, the country’s rank falls substantially. Given this reality, it’s difficult to say if the government has more influence on new concepts than the private industry.

Finding Innovation for Your Company

Once you accept that each company has responsibility for its level of innovation, you can start making plans to improve how your business operates, develops new products and reaches consumers in the global marketplace. Like many things in the business world, innovation often comes down to good management.

Organizing for simultaneous innovation capabilities creates a corporate culture and workflow that encourages new ideas and finds effective ways to market them to consumers. The best managers often divide innovation work into three horizons. Within the first horizon, companies use incremental developments to keep their current technologies relevant. In the second horizon, companies develop new ideas so they can build or expand their businesses. If the first horizon helps businesses stay relevant tomorrow, the second horizon keeps them relevant years into the future.

InnoSurvey provides a 360-degree assessment that helps companies determine whether they are taking advantage of opportunities that will put them at the forefront of innovation. Without a complete view of your company’s current position, it’s difficult to decide which direction you should head in the future. Think of it this way: maps are worthless when you don’t know where you are. InnoSurvey points to your current position on the map so you can develop informed directions that will take your business into the future.

Most experts agree that the world has started to undergo a fourth industrial revolution that will reduce waste and bring greater prosperity to people around the world. This new phase creates remarkable opportunities for businesses, especially those involved in high-tech fields such as 3D printing, nanotechnology, quantum computing, energy storage, biotechnology, robotics and artificial intelligence. The sooner your business creates an innovation development strategy, the sooner you can position the company for success today and tomorrow.