Reinnovation of the Major Automotive Players Through Eco Systems, Openness and Platform Design

When industries seek to totally redefine themselves, as many are doing today or are going to do, three of the most important aspects to consider in this innovation-driven change are developing greater linkages, openness and platform thinking – simply because it is impossible to solve many of today’s big problems alone and as a response to the new entrants that have entered the marketplace with new technology and shaken it up with a new way of operating that is challenging the status quo in way that was considered as impossible just a few years back.

Not long ago, it would have been absolutely out of the question to think that large car manufacturers would corporate closely with their arch-rivals, likewise it was not comme il faut to encourage co-ownership with other industry players, such as consumer goods manufacturers (the automotive players typically play the role of predator buying others’ shares and then dictating their terms and conditions in other industries). But times have changed, and this could be clearly seen in the CES exhibition 2017, which included major players like BMW, who last year bought the map service ‘Here’ along with arch-rivals Audi and Daimler and also cooperates with Toyota on fuel cells; furthermore, just a few days ago, Intel acquired a 15 per cent stake in the company.

At the global consumer electronics and consumer technology tradeshow CES 2017, it was clear that many exciting new things are happening in the automotive sector, including new joint ventures, the development of open standards and platforms and increased forward integration with the consumer part of the car industry to prolong and extend the life-time value of vehicles and to lock in customers into new eco systems, thereby mitigating the risk of customers leaving to search for other alternatives.

Alongside new household gadgets and personal devices, car makers are getting in on the CES action with advances in autonomous driving, new infotainment systems and promoting novel ways of interacting with the world around you from the driver’s seat. Even tech firms not usually associated with the motor industry are dipping their toes into the world of car tech. Just to mention a few highlights, CES 2017 included the reveal of the first production car from tech start-up Faraday Future: the FF91. With this car, the company has the Tesla Model S firmly in its sights and is claiming to be the world’s fastest production car with a 0–62 mph time of only 2.39 s. Honda revealed the NeuV city car concept, with its all new ’emotion engine’, while Toyota showed off the Concept-i, and Chrysler revealed the Portal as an MPV concept aimed at younger buyers. Basically, the automotive industry is redefining itself and a new industry is being borne.

The action taken by the automotive industry is, however, very late and under threat of being erased. A lot of shareholder value has been lost, probably totally unnecessarily. However, as there are still some strong owners and strong balance sheets in the old automotive manufacturing industry, it is now vital to really understand what’s driving and motivating innovation and what’s the reason behind the emergence of a new generation of car manufacturers. Perhaps it was never about selling cars and it is all about making life easier and more rewarding for billions of people. For a deeper understanding of blockers and what you can do to innovate in conservative industries have a look at the blog post about the four paradoxes, including The Dr Winterkorn Paradox.

Who are the winners – and what can we learn from them?

By studying data from InnoSurvey covering over 1,000 companies in 62 countries, we can see that radical innovators are more open to building stronger eco systems that are better structured for designing, sharing and developing platforms for the rapid innovation and launching of product and services at a fraction of the total costs that many conventional manufacturers would do, simply by having better systems in place for R&D cost control. On a 5 point Lickert scale, where 1 is do not agree at all, 3 is neutral and 5 is totally agree, 3.4 is the average answer for R&D cost control for radical innovators and 3.07 for incremental innovators – meaning not having any functional system in place for cost control. What’s also interesting is that racial innovators are at least as structured and goal oriented as incremental innovators, but working with proprietary improvements never really allows them to challenge themselves or co-workers in an open environment. Figure 1 shows the details about leadership and what to learn from radical innovators in terms of applying leadership for both short-term goal-oriented leadership (a spiral stair case) while at the same time nurturing and exploring the future horizons. 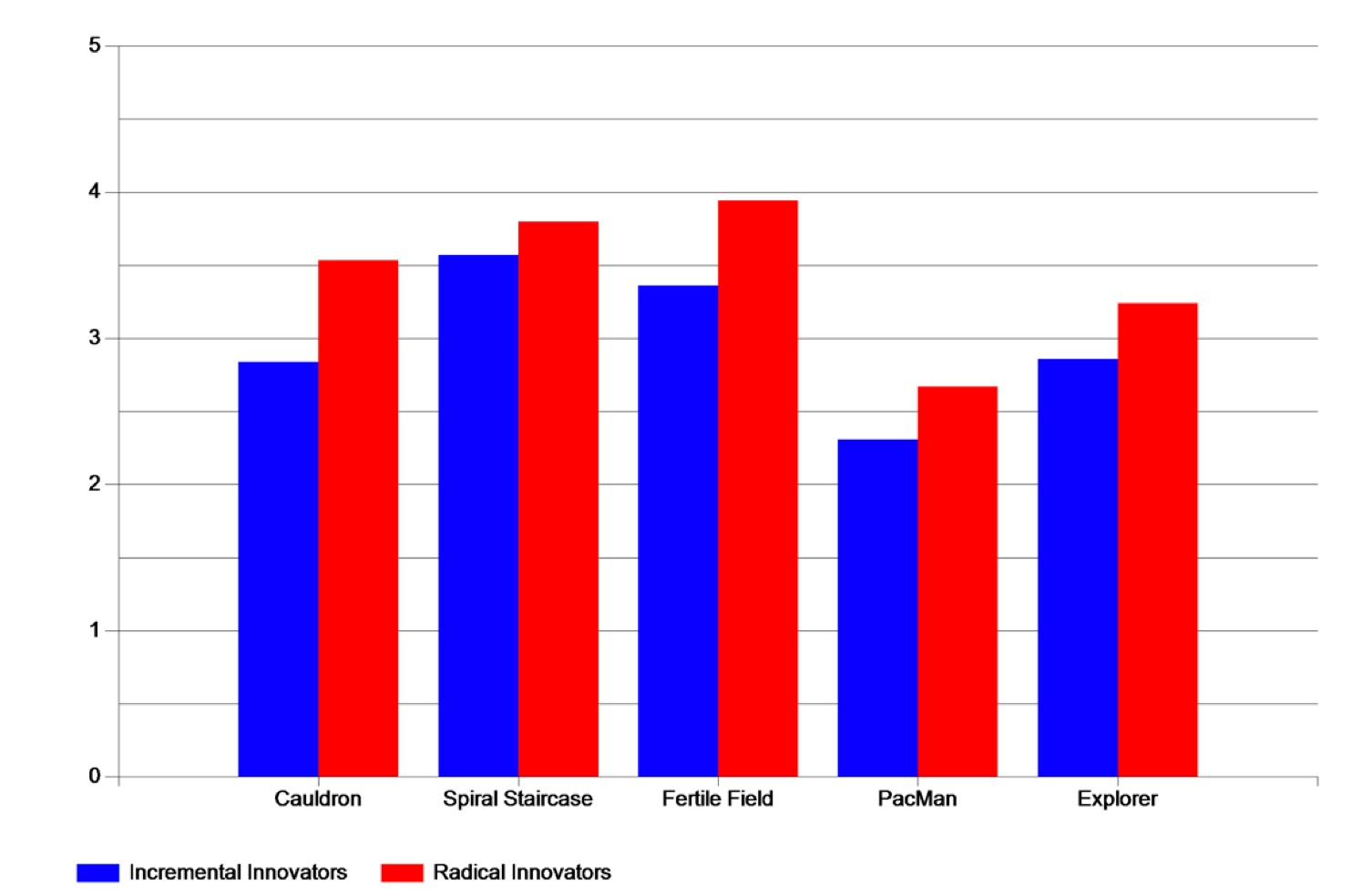 Figure 1. Radical innovators are generally strong in cauldron (an entrepreneurial style) and fertile field leadership (trying out things), while at the same time they are also more spiral staircase (systematic leadership towards small defined incremental steps) and explorative (for future possibilities). The work on leadership styles is based on Loewe, Williamson, Chapman Wood (2001) and all the data was collected and analyzed in InnoSurvey™ (2017).

Beside this, radical innovators have higher innovation capabilities for products and services, better R&D cost control and are also more mature in their innovation process, according to our data from over 1,000 companies in 62 countries.

Figure 2 shows how the companies and their employee, as well as exertional parties (such as customers, partners, suppliers), score their innovation process and the individual four steps from ideation to commercialization. It is also clear that companies scoring themselves as radical also have a superior innovation process.

Figure 2. Radical innovators (red) are more mature and have better capabilities in place for each of the innovation process steps from ideation to commercialization in comparison with incremental innovators (blue). All the data was collected and analyzed in InnoSurvey™ (2017).